The Suffering Will Not Compare To The Victory!

In 2017, Grace Schumacher (class of 2018) was in route to one of the most celebrated careers in Dominion Christian’s rich track & field history. She was claiming her place on a long list of elite performers for track, as well as one of the all-time honored athletes in DCS history.

Grace’s run became evident her junior year when she not only captured the region championship in the 200 meters and triple jump, but also garnered the region high point award. She was recognized as the outstanding competitor of the year for region 1AAA. Grace carried that momentum to the state championships. In the preliminaries, Grace was placed among the top four or higher in all her running events sealing a top lane placement for the finals. In the triple jump, Grace held up to her billing winning the event by a foot. In her final attempt she set out for the school record and on that jump her spectacular season came to an abrupt end. 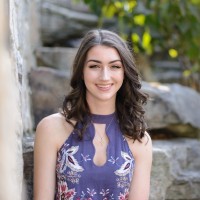 Grace suffered what most would consider to be a career ending knee injury. Grace had knee surgery in the off season.  She could never seem to return to the form that made her one of DCS’ best athletes. After an average senior year, based on her past performance, she took her talents to Berry College. She was able to perform among the top athletes on her team, but could not shake the shadow of that 2017 injury. Frustration set in and she decided to take the year off. What appeared to be the end of a career was actually a fresh start. Her fire was re-lit with a flame that burned brighter than ever.

Grace returned to the track determined to put the worst behind. She achieved the  Southern Athletic Association 200 M title as well as the All-SAA honors in the 4 x 100 meter relay. Her performance has not only earned her an invite to the NCAA Regionals, but helped to lead her team to a top 25 national placing.

What an awesome display of resilience! A true example of “Testimony First!” We applaud you Grace! GOD has certainly used your victory as encouragement to those that may be experiencing hard times.

“For I consider that the sufferings of this present time are not worth comparing with the glory that is going to be revealed to us.” Romans 8:18